BOARD OF THE WEEK – THE BOARD THAT CHANGED THE SURFING WORLD 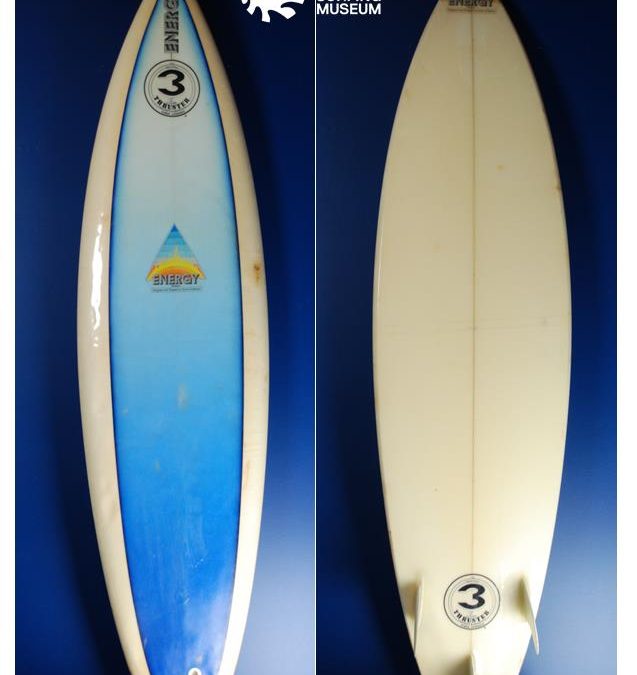 THE BOARD THAT CHANGED THE SURFING WORLD

Simon Anderson’s Thruster is surfboard is pretty much the most significant surfboard of the past one hundred years. This board ushered in a new era of performance and is the most copied and referenced design in history, let me explain.

Surfboards are beautiful aesthetic objects, three dimensional art, and functional sculpture. Most surfboard design changes have been subtle, the refinement of a design continuum, but sometimes original inspired designs are so radical that they change what we imagine surfing can be.

When assessing surfboards at the museum, we look at their significance. Some boards have local significance, others might be important on a national level.  Some surfboards, however, are exceptional.

In the early 1980s Narrabeen’s Simon Anderson was one of the leading pro surfers. Simon was a big guy and didn’t like the drift and slide, associated with twin fin designs made popular by multiple world champion Mark Richards. Inspired by a friend’s surfboard he had seen which used a third trailing fin, Simon designed a board with three fins of equal size that had a broader tail and narrower nose. Riding the board he felt the board had more drive, or thrust, so he called the boards “Thrusters”.

Early versions of the boards were ridden by friends and team riders, Simon’s competition debut of the Thruster ended without fanfare as he was bundled out in the first round of the Stubbies contest held in small surf at Burliegh Heads in Queensland. For the Bells Beach contest later in 1981, Simon was prepared with a trio of Thrusters he had made himself, but it was on a borrowed 6’6”surfboard shaped for Torquay surfer Steve Robertson that Simon displayed the performance potential of the 3 fin boards. In huge surf on Easter Saturday, while other surfers were struggling on less suitable equipment, Simon highlighted the speed and drive of the Thruster design with a dominant performance.

While Simon went on to win  the event the following day riding a shorter Thruster in smaller surf, it is the 6’6” with a blue fade deck spray and his performance in the six metre plus waves on Easter Saturday that has been celebrated and remembered by surfers around the world. Simon followed up his success at Bells with victory at the Coke contest in Sydney and the prestigious Pipeline Masters in Hawaii that same year, in the process establishing a new surfing performance paradigm.

The new design changed the way surfers rode surfboards. Footwork had previously been an important part of a surfers repertoire, with Thrusters it was possible to find the sweet spot balanced between control and drive and without moving your feet. With your back foot placed firmly over the fins Thrusters could be ridden with confidence, and in more critical positions on a wave.

As an indication of the significance of the performance advancement Simon’s Thruster represented, every professional world championship (men and women’s) since 1983 has been won on boards incorporating the Thruster three-fin set up. It has become the most copied and reproduced design in surfing history, it has been the standard for forty years. To this day most of the world’s elite surfers ride three finned surfboards most of the time. 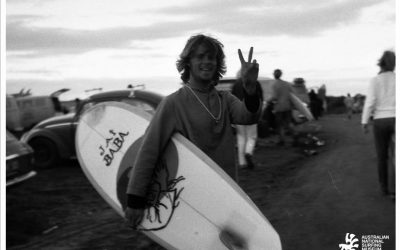 FROM THE FRYING PAN INTO THE FIRE   As the 1960s came to a close, the times were a changing, there was revolution in the air. It was a period of dramatic social change, everything was being questioned, and social norms were being turned on their heads. The summer... 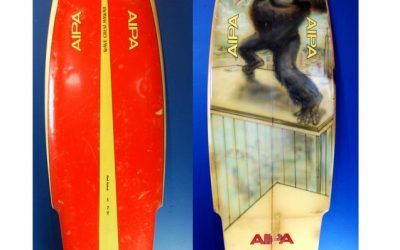 BOARD OF THE WEEK – MIGHTY MIGHTY KONG!

MIGHTY MIGHTY KONG! In the mid seventies as pro surfing became more established, there was one surfer who definitely stood out from the crowd. Wearing hyper-coloured superhero inspired wetsuits and riding fully decorated surfboards, Newcastle’s Mark Richards was... 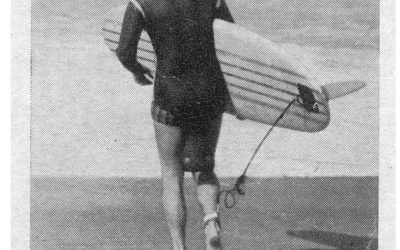 WHO INVENTED THE LEGROPE? For a very long time being a surfer meant you had to be super fit and a strong swimmer. For over sixty years in Australia the timber surfboards used were heavy and hard to handle. If you wiped out you had to be able to swim after your board...