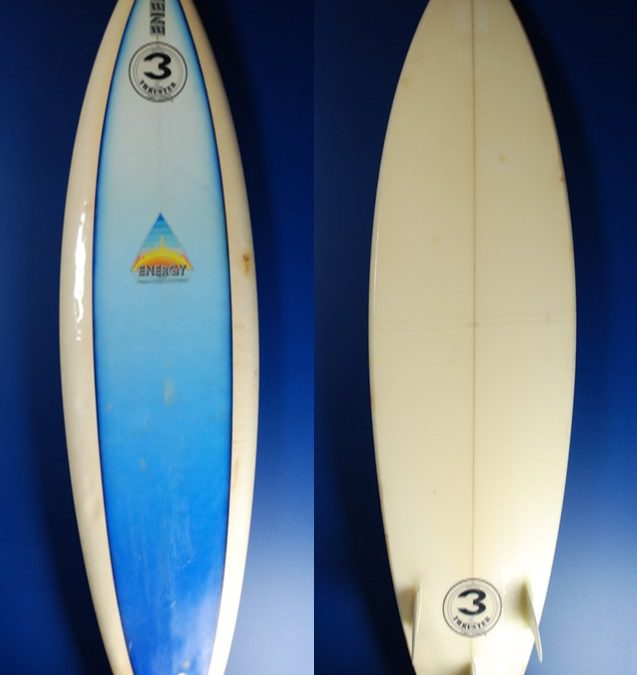 Simon Anderson’s Thruster is The Most Significant Design Innovation of the past 100 years, ushering in a new era of wave shredding performance and eventually becoming the most copied board design in history. Over the past 50 years, the majority of surfboard design improvements have been fairly subtle; refinements on a steady design continuum. But very rarely, original and inspired designs are so radical that they change what surfing is.

In our minds surfboards are beautiful aesthetic objects – three-dimensional art and functional sculpture at the same time. When assessing boards here at the museum, we look at their significance. Some have local significance, others might be important on a national level. Some individual surfboards, however, are exceptionally and universally significant. In the late 1970s and early 1980s, North Narrabeen’s Simon Anderson was one of the world’s leading pro surfers, mostly part-time as he was also a good shaper, which mostly paid the bills. At 6’4” tall and weighing 90+ kilograms, Simon was a big guy and didn’t like the drift/slide turns associated with twin fin designs made popular by multiple world champion Mark Richards. In late 1980, inspired by a friend’s board he had seen that used a third, smaller trailing fin centred on the tail behind twins, Simon shaped a board that had a broader tail and narrower nose, along with three fins of equal size. Riding it, Simon felt the board had more drive or thrust, so he called the boards “Thrusters”.

On the big fella’s recommendations, early versions were being ordered and ridden by friends and Energy team riders, even as plenty of others scoffed at the Thruster design with its “training fins”. Simon’s 1981 pro competition debut of the Thruster ended without fanfare as he was bundled out in the first round of the Stubbies contest held in small surf in March at Burleigh Heads in Queensland. Less than a month later for the Bells Beach Easter comp, Simon arrived in Victoria with a trio of Thrusters he had made himself. But in one of those little quirks of history, it was actually on a borrowed 6’6” Thruster (that Simon had shaped a couple of months earlier for Torquay surfer Steve Robertson) that the North Narra Natural displayed the great all-round performance potential of the Thruster. On Easter Saturday – in arguably the biggest and best ever surf for the historic comp and while his rivals struggled on longer, mostly single-finned sticks ­ Simon highlighted the speed and drive of the Thruster with a startlingly dominant display.

While Simon went on to win the event the following day riding a shorter Thruster in much smaller surf, it is the 6’6” with the blue fade deck spray and his performance in the four to six metre plus waves on Easter Saturday at Bells that has been appropriately celebrated and remembered by surfers around the world. Less than a month after that momentous Easter, Simon followed up his Bells success with victory in small surf at the Coke contest in Sydney, and in December that same year the Pipeline Masters in seriously meaty conditions. In the process Simon unwittingly started a new surfing performance paradigm. While it took a couple of years to be fully realised, the Thruster radically changed the way good surfers could ride boards and waves.

Most tellingly, footwork had previously been an important element of every competent surfer’s repertoire. But with Thrusters it was possible to find the sweet spot balance between control and drive with only the most minor movements of your feet. With your back foot planted firmly over the fins, Thrusters could be ridden with confidence into much more critical positions on waves and come out of those with no less speed. As arguably the best indication of the astounding significance of Simon’s Thruster, since 1983 every pro world championship (male and female) has been won on boards incorporating the Thruster tri-fin set up.

As The Standard And Best All-Round Design for 40 years now, the Thruster has also easily become The Most Copied design in wave-riding history, with an overwhelming majority of the world’s elite surfers still riding three-finned surfboards most of the time.